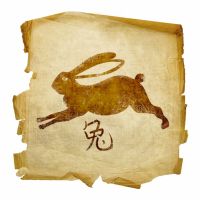 Point of the compass : East

Timid and attractive, the Rabbits of the Chinese Zodiac tend to act more like bunnies, whether they like it or not! This Sign is extremely popular and has a wide circle of family and friends. Its compassionate nature leads it to be very protective of those it holds dear, but where romance is concerned, the Rabbit’s sentimentality can lead it to idealize relationships. The sweet, sensitive Rabbit often ends up giving more of itself to a partner than is realistic or healthy. The good news is, when this Sign goes off-balance, the Rabbit’s core group of friends and its stable home life help bring it back to center.

The Rabbit is a rather delicate Sign that needs a solid base in order to thrive. Lacking close, supportive friends and family, the Rabbit might just break down in tears at the first sign of conflict. Emotional upsets in this Sign’s life can even lead to physical illnesses. Rabbits dislike arguments and other conflict and will try anything to avoid a fight; this results in something of a pushover nature. Rabbits can also lapse into pessimism and may seem stuck in life — often to mask their insecure natures. Rabbits tend to move through life’s lessons at their own, rather contemplative pace; it’s a waste of time to become exasperated with this Sign’s seeming disinterest in facing its problems and conquering them.

With the right partner — meaning someone whose high principles won’t allow it to take advantage of this sensitive, giving Sign the Rabbit can make an incredibly loving and protective partner or family member. Rabbits love to entertain at home and always make sure their house is comfortable and tastefully-furnished. What Rabbits need most is a stronger sense of self-worth and the security that comes with it. Their discerning natures, coupled with some hard-won assertiveness, will help these happy creatures go far.

A lover of good conversation, reading, and intellectual discussions, the hare is sincere and are often gifted healers, herbalists, and doctors. Traditionally associated with clear-sightedness, the Hare is an excellent judge of character and has a certain ability to recognize when others are lying. A Hare’s home is typically a beautiful one, and they take great care and expend a lot of energy making it comfortable. You will find a lot of expensive and precious items in the home of a Hare personality.

The Chinese have many strange legends about the Hare, one of them is that they inhabit the moon, together with three-legged frogs. Another legend has it that the Hare possesses the secret recipe for the elixir of immortality. The most compatible match for a Rabbit is the Goat or the Pig.