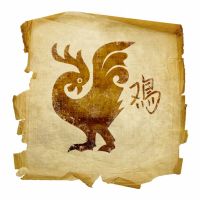 Point of the compass : West

The Rooster is the counterpart of the Monkey and represents a “Yin” or feminine quality. They are often abrasive and aggressive, and are sometimes considered rude. Roosters are very concerned with their appearance, and can spend many hours standing in front of mirrors. They often dress a bit colorful for some tastes, but are usually stylish.

Roosters are always busy, seldom being accused of being a couch potato. The have many talents and typically succeed in anything that they attempt. They make good detectives, doctors, nurses, and trouble-shooters. Rooster personalities have extremely high ideals and have little tolerance for those who don’t. They often begin many projects at one time to keep busy, but this sometimes leads to family problems, as they have a tendency to ignore those who are closest although they remain deeply in love and fail to see any problem in the relationship. Traditionally, Roosters are seen as the embodiment of direct, forceful and forthright behavior.

Roosters are quick thinkers and are practical and resourceful, preferring to stick to what is tried and true rather than taking unnecessary risks. Roosters are keenly observers of their surroundings and those around them. It’s hard to slip anything past a Rooster, since they seem to have eyes in the backs of their heads. This quality can lead others to think the Rooster is psychic, but that’s not generally the case; instead, this Sign enjoys a keen attention to detail that makes it a whiz at anything requiring close analysis. Roosters make great lawyers, brain surgeons and accountants, to name a few of this Sign’s possible occupations. Above all else, the Rooster is very straightforward and rewards others’ honesty in kind.

Roosters tend to be perfectionists and expect to be in control, especially over their appearance. Primping and posing for the Rooster can go on forever. Being noticed and admired is an aphrodisiac for Roosters, and they can go a long time on a few kind words. Roosters also adore being out on the town, especially if they’re in the company of adoring friends. The Rooster will also be the best-dressed one of the bunch style counts with this Sign, regardless of the cost.

Roosters need to learn to value their heart and soul as much as their good looks.