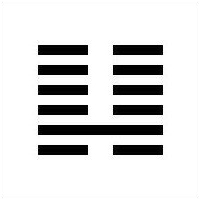 The trigram above – K’UN – the Receptive, Earth
The trigram below – KAN – the Abysmal, Water

General: Trust is the key to true leadership.

Love: Conflicted can be avoided by using your integrity.

Business: Staying honest and fair will help gain the respect of those that work for you.

Personal: Discipline and honesty should be incorporated into your approach to life

This hexagram is made up of the trigrams K’an, water, and K’un, earth, and thus is symbolizes the ground water stored up in the earth. In the same way military strength is stored up in the mass of the people – invisible in times of peace but always ready for use as a source of power. the attributes of the two trigrams are danger inside and obedience outside. This points to the nature of an army, which at the core is dangerous, while discipline and obedience must prevail outside.

Of the individual lines, the one that controls the hexagram is the strong nine in the second place, to which the other lines, all yielding, are subordinate. This line indicates a commander, because it stands in the middle of one of the two trigrams. but since it is in the lower rather than the upper trigram, it represents not the ruler but the efficient general, who maintains obedience in the army by his authority.