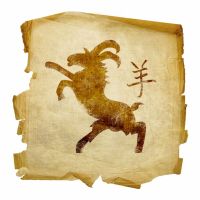 Point of the compass : South – Southwest

Sheep (Goats) are regarded by Chinese astrologers as having a strong essence of “Yin”, therefore the most feminine of the animal signs. The are typically elegant, charming, artistic, and fond of natural items. Sheep personalities often find expression in craftsmanship rather than originality. They are very conservative and often leave their creative sides unexplored when it comes to career advancements.

Sheep are insecure and need to feel loved and needed. They shy away from confrontation and often follow the crowd instead of standing up for their true beliefs. They resent being led by others, although they allow it. This characteristic often leads them to ask for help, then resist it when it comes.

They study the esoteric, reading books on new-age beliefs, astrology, and fortune-telling. Because of their indecision, Sheep do not usually make good business people. They prefer to use their artistic talents and craftsmanship skills. Sheep are typically very romantic and sensitive. They are hard to resist with their loving and caring nature, and make excellent spouses.

Goats tend to have a hard time with romance; anyone who couples up with a Goat must know, this Sign has a sensitive streak a mile wide and can be subject to bouts of anxiety over seemingly inconsequential things. Goats need plenty of love, support and open reassurance from their lovers. If a relationship is marked by conflict, the Goat will often pull away — either physically or simply by retreating into the safe haven of its imagination.

If the romance is going well, however, Goats won’t hesitate to tell their partner what they need and they can be quite insistent about it. This Sign will definitely return the favor, however; the Goat has a luxurious side that delights in indulging a lover’s every wish. Appearances are also important to the Goat, which may explain why these folks can spend hours primping and posing.

Goats are generally most comfortable in their own minds (which other, more linear-thinking Signs may have trouble deciphering). This Sign makes a great craftsperson or artisan, or perhaps a teacher of New Age studies — any occupation that allows its mind the full range of freedom. Goats tend not to be very well-organized, precluding many more dry business endeavors. In fact, Goats tend not to be very materialistic in general, finding plenty of riches in their own imagination. However, especially when in love, the Goat can be quite a lavish gift-giver.

You’re elegant and creative, somewhat timid and prefer anonymity. You are most compatible with Pigs and Rabbits, but don’t mix it up with the Ox.